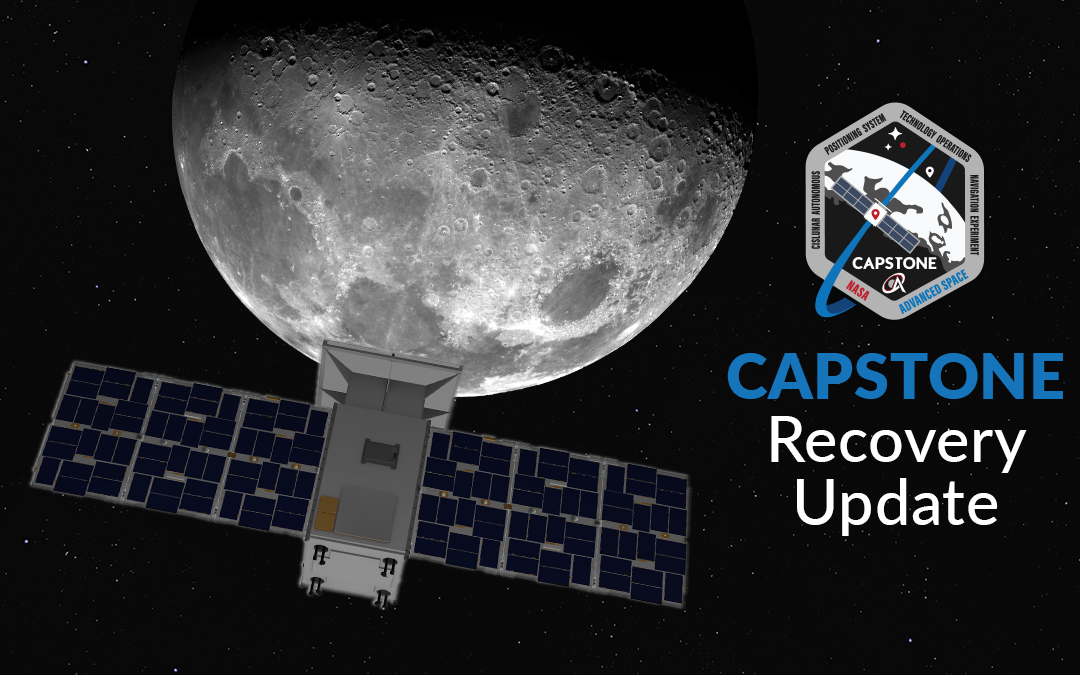 Over the past couple of weeks, the CAPSTONE mission team has been working to resolve an anomaly that occurred early last month and resulted in the spacecraft losing full 3-axis attitude control and entering into a spin stabilized state. Through extensive analysis and evaluation supported by a dedicated team of individuals on the mission team and key partners, the most likely cause of the anomaly was identified as a valve related issue on one of the spacecraft’s eight (8) thrusters. The partially open valve resulted in thrust from the associated thruster whenever the propulsion system was pressurized. To attempt a recovery from this condition, the mission team conducted multiple tests on the vehicle and evaluated extensive telemetry and simulation data and then formulated a plan for attempting recovery of the vehicle’s full 3-axis control.

This recovery sequence was uploaded to the spacecraft yesterday (Thursday) and was executed early this morning (Friday 10/7). Initial telemetry and observation data after the recovery attempt points to a successful recovery of the system which has now regained 3-axis attitude control. The updated spacecraft attitude has oriented the spacecraft solar arrays to the Sun and implemented an orientation for the downlink antennas which significantly improves data downlink performance as compared to the pre-recovery attitude. This is a major accomplishment for the mission team and positions the mission well for upcoming critical activities and arrival at the Moon. The risks of this anomaly and recovery process were significant and the team worked extensively and collaboratively to mitigate these risks through disciplined engineering analysis and review. Over the coming days, the spacecraft status will be monitored while the team works to evaluate subsequent changes to the spacecraft operating procedures so that upcoming critical events can be conducted in the possible presence of a valve that remains partially open. In parallel, the mission team will work to design possible fixes for this valve related issue to further reduce the risk of future propulsive operations. The CAPSTONE mission team is grateful for the public and private support provided to the team during this challenging phase of the mission. Many thanks to the collaborative efforts and many hours of hard work from the CAPSTONE mission team and partners including Terran Orbital, NASA, NASA’s Deep Space Network (DSN), Stellar Exploration, and Advanced Space. Consistent with our goal to operate the mission in a safe and transparent way, we will continue to provide updates as information is available. CAPSTONE remains on track to insert into its targeted Near Rectilinear Halo Orbit at the Moon on November 13th.